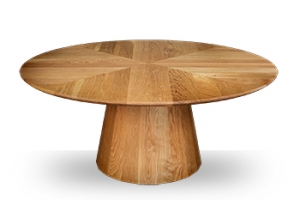 CRAFTSMANSHIP
GOES INTO EVERY PIECE
OF OUR FURNITURE.

At TKEL Furniture we have a love for timber and are passionate about creating beautiful timeless pieces of furniture. This is why we do what we do. Our family-owned business creates bespoke furniture in Wodonga. Sustainability is of high importance and we salvage timber from many sources and in turn, create something memorable.

To be able to re-use timber and give it a second, third or sometimes even fourth life is the ultimate reward. The stories behind the timber we use are fascinating and we especially enjoy sharing these stories with our clients.

We hand craft unique pieces of furniture that will last forever. Using traditional craftsmanship we blend in a modern touch. Our philosophy of reuse and reduce waste means we only use reclaimed and sustainably milled timber. In creating the perfect piece of furniture for your lifestyle, we can use your own timber that has your story attached, to cherish for generations to come.

We are ensuring that we replace more than we use. Our legacy will continue to grow, giving future generations the ability to enjoy the fresh air and the stunning natural beauty that our Australian native trees have to offer. For every piece of Handmade Custom furniture created, we donate native trees to be planted. With solar power, and waste reduction methods, we’re also working toward becoming a carbon-neutral business. 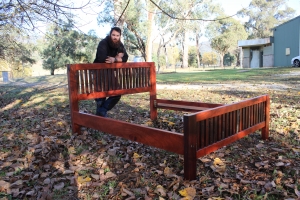 Trent has been in the furniture-making business since commencing his apprenticeship in Wodonga at the ‘Timber Shed Furniture & Wodonga Joinery’ in 2004 where he worked for 7 years specialising in bespoke timber furniture. During this time he also graduated with an apprenticeship in Furniture at Wodonga TAFE, where he was awarded top apprentice in his class. In 2012 he took the opportunity to move to Geelong to gain additional experience in building and installing kitchens, vanities and laundries. After travelling overseas during 2013 he returned to Wodonga and after some time working with kitchen cabinetry, Trent decided to follow his passion of working with timber and launched TKEL Furniture. 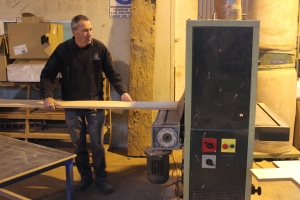 Merv came from a farming family, having grown up in the small Mallee country town of Rainbow. Here he completed all his schooling before commencing a 42-year career with the National Australia Bank in March 1973.

After several appointments in rural Victoria, he and his family finally arrived in Wodonga in January 1997 and where they Merv made his home. Merv elected to take 12 months Long Service Leave from the NAB in May 2014. This coincided with Trent starting his own business. This then led to Merv deciding to retire in July 2015 and help Trent to grow his business. At the time this included looking after the organisation of the books but also involved him on almost a daily basis working with Trent. He assisted in the workshop to make furniture etc, as we use a lot of reclaimed timber, he was often designated the job of removing nails, screws etc from the timber before we commenced the job of turning it into a loved piece of For furniture.

Merv passed away in January 2018. Without his passion, commitment and drive, TKEL Furniture would never have come about, for this, we will be forever grateful.

From an early age, Cain enjoyed being in the shed with his Pa and Dad building small pieces of furniture and novelty items. His love for timber was really uncovered when he undertook timber studies at school while he was a student at Victory Lutheran College. He tried the building and construction and furnishing courses taught at Victory Lutheran College under the same teacher Trent trained under in TAFE.  Cain thoroughly enjoyed the furnishing component and would like to continue to develop his skills in this area.  Cain completed his Year 11 work experience at TKEL Furniture 1 day a week.  His enthusiasm also saw him using any spare time such as school holidays to come in and help out.

We look forward to working with Cain to develop his skills and to become a fine furniture maker at TKEL Furniture, building the future antique.

“After years of searching for the right solid timber Blackwood dining table, we were lucky enough to come across Trent and TKEL furniture. We wanted our table to be a feature of our home and to suit us and our needs. Trent was able to get this vision from inside our minds (and dreams) and to turn it into the most magnificent table. His craftsmanship, the fine details, the personalization and his creativity are exemplary and we couldn’t be happier with the finished product that was delivered with the utmost care and professionalism. We were also amazed that we could have this level of choice and consultation for the same price you’d pay for a mass-produced factory equivalent.

Thanks so much, Trent and TKEL for the centrepiece to our current and future memories.”
Jane & Matt Tinkler

“When we decided to renovate our 90-year-old central Albury house we were looking to add a sense of uniqueness to the finishes. Trent and the guys at TKEL did an amazing job taking some old Red Gum floor beams and Victorian Ash framing studs and turning them into some amazing joinery. The Red Gum has been used as a fireplace sill and outdoor servery with the ash used across some floating shelves, bathroom vanity tops and as the centrepiece of our kitchen a 3m x 1.3m timber benchtop. 2 Oregon beams were made into a beautiful dining table that we will be spending many family diners around. The results speak for themselves and the service, advice and input from Trent and the team along the way was invaluable.”
Andrew Kaye

“Trent and Merv from TKEL were terrific.
We had an old derelict woolshed on the farm, from which they recycled the timber into benchtops, dining table and bar stools. We could not have been happier with their workmanship and attention to detail. The pieces of work are a feature of our home. We have no hesitation in giving them the highest recommendation.”
James & Geraldine Male

“We are over the moon with the end result of our custom made vanity. Trent’s workmanship, communication and professionalism have been first class. We are so impressed with our piece from the materials used to the exceptional joinery. It screams quality. Trent’s quote was extremely reasonable and he has made this experience so easy. Our expectations have been exceeded in every way, we are already planning our next custom made piece.”
Paegan & Les Romero

Through our partnership with Wodonga Land care and Our Native Nursery, we are ensuring that we replace more than we use. The TKEL Furniture legacy will continue to grow, giving future generations the ability to enjoy the fresh air and stunning natural beauty that our Australian native trees have to offer. With every piece of Handmade Custom furniture created by TKEL Furniture, a donation is made.